Walnut wood was widely used for fine furniture in the period after the Restoration in England. Its heyday was short-lived however, as the importation of tropical hardwoods, in particular Mahogany, gave makers easier materials to work with and a range of colours which were instantly popular. By the end of the reign of Queen Anne, Walnut had all but ceased to figure in cabinet making. As a veneer it gained a modest but continuing role, facing inferior but sturdy timber with its swirling grain - and the rare, expensive veneers made from the burrs found on a tiny fraction of trees have always found a ready market.

The simple Art Deco occasional table shown below is an unusually late piece. There are much older and more elaborate specimens here: 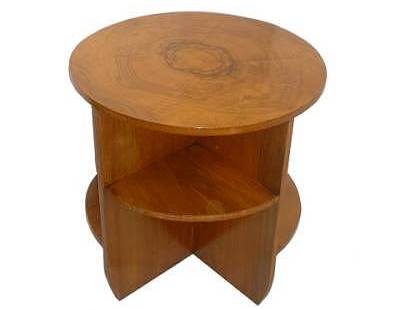