Although Grafted Walnut trees do not suffer from very many pests and diseases, nonetheless their are a few you should watch out for. Trees in poor health or lacking proper nutrition are more liable to succumb to attack, so make sure that you address these needs as well as dealing with any immediate problems.

Most pests of Grafted Walnuts are not too serious and cause mostly cosmetic damage or result in a reduced crop rather than threatening the life of the tree. Here are the main culprits in the UK climate - click on the pictures for more and bigger photographs of each

The Walnut Leaf Gall Mite (Aceria erinoea, previously known as Eriophyes erineus) causes unsightly damage to the leaves, causng a raised hollow bump about half an inch long and with the appearance of a caterpillar's body. The mites are tiny - less than 0.1mm - and lurk overwinter in unopened buds, doing their damage before the leaf is properly developed. Unless the infestation is huge it will not cause the tree much strain, and is in any case very difficult to get rid of entirely 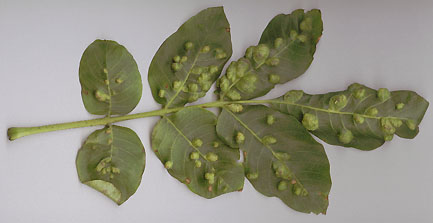 These birds are not primary pests of Walnuts, but where either poor growing conditions or burrowing insects have created cavities inside the tree, they will sound them out and dig around looking for grubs. The resulting holes can do serious and even fatal damage to young trees. The only reliable way to keep the birds away is to make sure that the trees are as healthy as possible in the first place.

Officially 'Laspeyresia pomonella', this moth can destroy the nut kernels early in the fruiting season and also stain both shell and kernel later.

Pheremone traps to catch male moths are effective from early-mid Spring, otherwise there is no defence apart from sprays.

You are unlikely to meet the following pests, but it is as well to be able to recognise them even if only to eliminate their presence

In Canada and the USA there is danger from the 'Rhagoletis' species of 'Walnut Husk Flies', which feed in the husk and stain the fruits, as well as spoiling the flavour of the kernel. Sprays are the only widely used control.

In most places from time to time there may be outbreaks of these very minor pests:

Generally confined to North America there are also:

Grafted Walnuts are susceptible to some viral and fungal diseases, some of which are common to many plants and some more specific.

Causes small black spots on leaflets, leading to large withered areas. Can also cause dieback of shoots and damage to the fruits, notably blotches and holes. A large part of the crop is likely to be lost in a serious attack, especially when the male catkins are affected.

This is very much a disease of new growth and nuts, and infection occurs only in wet weather. The most damaging circumstances are wet, cool periods around flowering time.

The bacteria will survive overwinter in apparently healthy dormant buds, leading to new infection of young growth - varieties which leaf early are most at risk.

Infected parts should be cut out a good way back from visible damage and burnt. Bordeaux mixture spray may help. Defences against blight include keeping soil pH above 6, avoiding wetting the foliage with spray irrigation, guarding against excessive nitrogen feeding and pruning enough to give an open structure for aeration.

A widespread fungus causing brown blotches on young fruits and leaves, when severe will cause the nuts to abcise (fall prematurely) after turning black and considerable leaf fall.

Another disease which favours wet weather for infection, it usually appears in late May and early June and will overwinter on leaf litter.

Fallen leaves should be cleared and burnt or properly composted. Again, Bordeaux mixture may help a serious infection.

Honey fungus has many names, including 'Shoestring fungus', 'Oak root fungus' and 'Mushroom root rot'. Officially it is 'Armillaria mellea'.

This is a disease affecting many species of trees, and causes defoliation, dieback and death. It can enter at wounds and roots, and can spread through the ground to neighbouring plants. It rots roots, collar and butt and is most dangerous to already weakened trees.

The only defence is to remove diseased trees and their roots, and any nearby stumps. Some of the American Walnut species (J. hindsii, J. nigra and hybrids) are resistant to honey fungus so using them as rootstock is one option - however this increases the chance of attack by Blackline (see below).

This disease, caused by a strain of the Cherry Leaf Roll virus (CLRV-W), affects only non-regia rootstocks.

Symptoms include a dark line between the stock and grafted tissue ('scion'), poor growth, yellow drooping leaves and early leaf fall. As the disease progresses the tree suffers dieback and eventually death.

The virus is transmitted through the use of infected tissue for grafts, by pollen and seed - so it can and will spread rapidly. The spread through individual trees is slow so serious symptoms may not appear for several years after infection.

Caused by a bacterium known as Agrobacterium tumefaciens which mainly enters through wounds, swellings appear on the roots and lower trunk. These are not usually damaging.

Widespread but only slightly damaging leaf blotch, causing yellow blotches on the top of leaves and mildewy patches below.

Both Nectria galligena (Nectria canker) and Nectria cinnabarina (Coral spot) can infect Walnuts. N galligena causes occasional cankers but N cinnabarina is more harmful, and can lead to wilting, rot and dieback. Any identified infection should be cut out and burned.

Botrytis cinerea or Common Grey Mould is only likely to affect plants in very wet or humid conditions. The fungus can affect harvested nuts if they are not dried correctly.