Of the hundreds of varieties of English Walnuts available - and the many closely related species - we have selected a range suitable for the climate throughout the UK and for the differing purposes which our customers have in mind. These amount to several dozen in all, which are listed below. Each entry leads to details on the variety or species.

The following varieties are recommended for their nut-bearing prowess:

Nutlets enlarge as the summer passes. They can be picked for pickling until the shell forms in early July. Nuts such as those below can be harvested around the end of October. 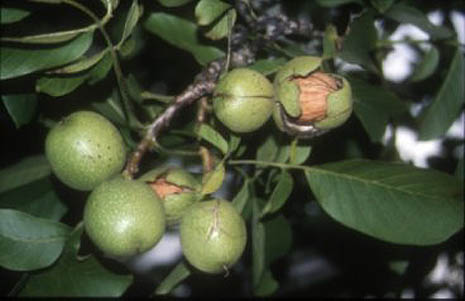 A cluster of nuts ready for harvest

Many varieties of walnut trees produce valuable timber, making them a long-term asset. Generally grafted trees will reach a worthwhile value after around 40 years of growth. The current value of walnut wood is significantly higher than that of oak.

For timber production we recommend the following varieties:
Axel, Buccaneer, Coenen, Number 16, Plovdivski, Proslavski
Happily, all of these varieties are also reliable producers of edible nuts. Other varieties such as Hansen and Broadview tend towards slow-growing or spreading trees, but given sympathetic formation and pruning may yield a useful butt.

Growers looking towards agro-forestry trees, or trees that will enhance parkland, avenue or pasture may wish to consider the largest class of tree, which as 4-5 year olds are already formed with a crown and clear stem, generally giving the tree a height of 3.5m or more.

However, younger trees generally transplant more readily and require less aftercare, as they retain a greater proportion of their root when lifted from the nursery.

The main related species of interest to our customers are from North America and the Far East. Most of the J nigra varieties from America are big trees with valuable timber, though most will give nuts too. 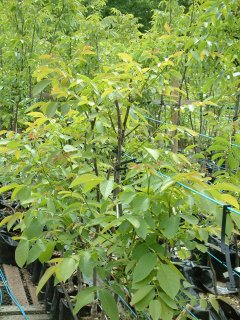 A few of the many varieties we grow